The chemical stability of lycopene in processed products

In the review, the researchers also showed that the cooking ingredients influence lycopene isomerization. Processing of lycopene-containing food in the presence of oil or without the addition of oil significantly varies the levels of lycopene isomerization. Moreover, the kinetics of the lycopene isomerization were also affected by the nature of solubilizing oil, which is explained by the composition of the fatty acids and the oxidative stability of the oil. Upon addition of oil to tomato products (e.g. during sauce preparation), Z-isomer formations are preferred kinetically and thermodynamically over their all-E counterparts. Therefore, high levels of Z-isomers of lycopene are found in these processed products. Research carried out by Colle et al. demonstrated that only very intense processing conditions (e.g., 130-140°C for 50 min) can improve the lycopene bioaccessibility in plain tomato pulp. Their investigations documented the high thermal stability of lycopene in tomato pulp that did not have any other added food ingredient.

Among many other results, the study confirmed that the intensity of thermal treatments influences lycopene retention. At temperatures <100°C, limited lycopene degradation is observed in olive oil/tomato emulsion; data suggested that at the thermodynamic equilibrium stage, lycopene exists as a 1:1 mixture of all-E- and Z-lycopene.

Scientists also demonstrated that the degree of geometric isomerization of all-E-lycopene is also influenced by organic solvents and photosensitizers. Interestingly, the photo-induced isomerization of lycopene can be utilized to authenticate field-grown tomatoes as different from greenhouse-grown tomatoes. Due to the effect of sunlight UV exposure that promotes the formation of the energetic hindered 5-Z-isomer, they explained that under field-growing conditions, 5-Z-lycopene dominates over 7-Z-lycopene, while 7-Z-lycopene dominates over 5-Z-lycopene under greenhouse-grown conditions. So this could be used as biomarkers to differentiate between products grown in different conditions.

Dehydration is a common food preservation technology that facilitates the extension of shelf life and reduces the cost of transportation due to reduced moisture and volume. However, at an industrial scale, fruits and vegetables, including lycopene-rich tomatoes, are mostly dehydrated using methods like thermal drying (hot air spray drying or sun drying) in the presence of oxygen, which accelerates the oxidative degradation of lycopene and other bioactive compounds, affecting the nutritional characteristics and the physical features (i.e. shrinkage) of the product.
Alternatively, freeze-drying, microwaving, infrared dehydration and osmotic dehydration methods are utilized to minimize the physical and biochemical changes mentioned above. In the case of hot air drying, the oxidative degradation of lycopene and other bioactive compounds can be minimized by using low heating temperatures (e.g. 50-70°C).
The kinetics of lycopene degradation in tomatoes during hot air drying at five different temperatures (60, 70, 80, 90 and 100°C) in a cabinet drier at an airflow rate of 0.2 m/s and 20% relative humidity was found to follow first-order reaction kinetics. The reaction rate constants were found to be significantly affected by the drying temperature, and increasing the temperature from 70 to 80°C was found to be very detrimental for lycopene degradation with a Q10 value of 2.365 (a measure of the temperature sensitivity of an enzymatic reaction rate or a physiological process due to a 10°C increase). Thus, it was suggested that tomatoes should be dehydrated at temperatures lower than 70°C for improved retention of lycopene and β-carotene in processed products. 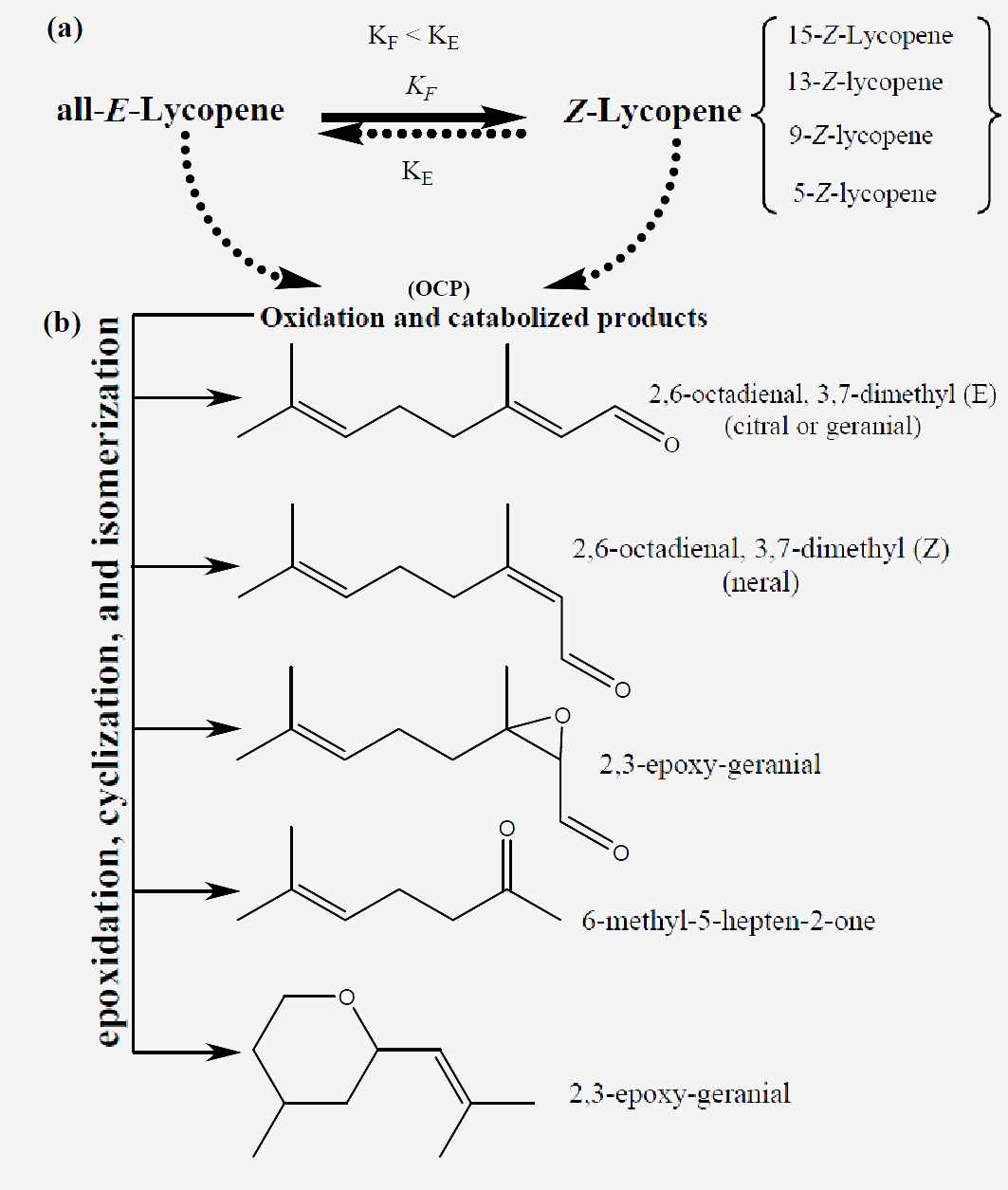 The degradation of lycopene and other carotenoids leads to the production of aroma compounds, which may influence the flavor of the processed products. Utilizing a model system with an accelerated flow of oxygen (about 100 mL/min) in a light protected oven at 32°C, researchers identified ten volatile compounds as products of the oxidative degradation of lycopene. These volatiles were formed as a result of the epoxidation, the cyclization and the isomerization of lycopene. Strategically, it was suggested that an increase in these volatile compounds in lycopene-containing foods during processing and storage could be used as an important marker of lycopene oxidation.

Strategies to promote lycopene retention
The review confirmed that ultrasound and high-pressure processing (HPP) minimize lycopene degradation. These technologies are widely exploited for their capabilities to induce desired changes in chemical, physical and biological properties (including increases or decreases in texture and viscosity), antioxidant properties and emulsifying capacity, as well as contributing to inactivating enzymes and microorganisms. Moreover, these technologies can minimize the detrimental effects of high temperatures on quality-related properties such as texture, flavor, and color. Research published by Anese et al. noted that ultrasound processing of tomato pulp could be effectively utilized to increase the viscosity of products without affecting all-E-lycopene levels and in-vitro bioaccessibility.

HPP can be utilized to retain quality and most of the essential phyto-constituents as well as to produce a microbiologically stable product more efficiently than conventional thermal processing. Research conclusions by Jayathunge et al. revealed that HPP provides superior quality tomato juice with enhanced redness, total carotenoid content, lycopene content, stable total phenolics and inactivation of pectin methylesterase, as compared to thermal processing.
Gupta et al. studied the retention of lycopene and β-carotene in tomato juice subjected to combined pressure-temperature treatments, pressure-assisted thermal processing (PATP), and thermal processing for up to 10 min. Both types of juice (raw juice and hot-break juice) used for the experiment exhibited minimal impact on all-E- and Z-lycopene degradation. HPP and PATP treatments showed better preservation of total lycopene in processed tomato juice, made evident by the total lycopene content being similar to that of the raw juice, whereas thermal processing caused a minor but significant decrease in total lycopene.  Analyses in all studies showed that conditions of temperature and pressure were not severe enough to solubilize the lycopene crystals (which appear to be enveloped), which can facilitate micellization for improved bioaccessibility. Additionally, the pressure-induced compression of food components favors the formation of compact lycopene aggregates that might inhibit the ability of all-E-lycopene to be isomerized into nonlinear Z-forms. Researchers conclude HPP and PATP treatments significantly improve retention/extractability of lycopene compared with usual thermal processing methods.

During the storage of lycopene-containing processed products, lycopene degradation exhibited a complex pattern that varied according to cultivars, processing methods, water activity, moisture content, type of storage containers, and storage temperature and duration. Several long-term studies (12 months) involving tomato juice (in Tetrapack, cans or glass bottles), tomato paste and tomato pulps have shown that the lycopene content was stable at usual storage temperatures. The high retention of lycopene in processed tomato products during storage is likely favored by the inactivation of enzymes during processing, and also by protection from other antioxidants, such as ascorbic acid, tocopherols and phenolic compounds found in significant amounts in tomatoes and their processed products.
The review also confirmed that the dehydration conditions of fruits and vegetables at different temperatures influence the final moisture content and water activity of the product. For improved retention of lycopene and other carotenoids during thermal dehydration, tomatoes should be dehydrated at temperatures of 50-70°C in order to achieve low levels of water activity (0.2-0.4) and moisture content (2-4%), thereby providing higher retention of lycopene and an enhanced microbiological quality of dehydrated foods.

Chemical stability and bioavailability of carotenoids are often compromised due to incomplete release from the food matrix (during digestion), poor solubility and oxidative degradation. Encapsulation refers to a process of entrapping an active substance, such as phytochemicals, in structurally engineered micro- or nano-systems, to develop an effective physical and thermo-dynamical barrier against deteriorative conditions of humidity, oxygen exposure, light exposure, enzymes, and pH. The encapsulation of carotenoids, including lycopene, was found to be a very effective strategy in order to improve their chemical stability and bioavailability (by influencing bioaccessibility and absorption), to lower the interaction of lycopene with other components of food, and to control the release in the intestine and during fat digestion.
Among the several methods available for the encapsulation of bioactive compounds, encapsulation of lycopene using spray-drying, spray-chilling, electro-spraying, and nano-dispersion techniques have shown promising results. In the spray-drying method, use of dehumidified air has proven to be an effective way to increase lycopene encapsulation efficiency by up to 93%. The total lycopene contents of such encapsulated tomato powders were shown to decrease by 8-12% and 27-34% (without isomerization) after 56 days stored at 4°C and 25°C, respectively (data on degradation of non-capsulated lycopene was not determined/provided). Microencapsulation is an effective technique to significantly improve the stability, bioaccessibility and biological activity of lipid-soluble and readily oxidizing nutrients such as lycopene. However, most of this work has been carried out on a research scale. Although recently, LycoRed Ltd. in Israel has launched micro-encapsulated lycopene (LycoBeads 5% and 20% alginate beadlets) for dietary supplements and food fortification.

Nano-dispersion and nano-emulsion (which differ by their respective behaviors in terms of phase and solvent material) have also been used to enhance the solubility of lycopene in aqueous solutions, as well as its chemical stability and bioavailability. In nano-dispersion, the water-insoluble lycopene, dissolved in a volatile solvent (e.g. dichloromethane, hexane, acetone etc.) and the aqueous phase-containing emulsifier (dissolved in water) are mixed at a specific ratio, and passed through a high shear homogenizer to produce a coarse oil/water emulsion. The resulting emulsions are then passed through a high-pressure homogenizer, and the volatile solvent is removed via evaporation under reduced pressure to produce a nano-emulsion with a uniform distribution of particles.
In contrast, in nano-emulsion, lycopene is dissolved in oil, which is not removed at the end of the preparation process. Researchers showed that lycopene nano-emulsions have an excellent stability of colloid systems and high transmittance values.

The authors conclude their review by pointing out that most lycopene stability studies are reported using lab-scale processing. However, the physical properties, chemical characteristics and nutritional profile of processed products from lab-scale processing may yield significant deviations from an industrial-scale process. Similarly, the retention of lycopene and other micronutrients may differ significantly in commercially packed food. Therefore, it is important to follow up this research with real large-scale industrial processing, packing, and storage conditions, in order to mimic the actual nutritional and sensorial profile of products that reach our plate.